Stewarding MITH's History: A New Window Into Our Past

by Stephanie Sapienza on March 4, 2016 in Research

No doubt you’ve noticed that the MITH website looks a little different these days. We’re proud of this latest refresh of the site’s design, which brings a number of updates such as responsive design, better usability on mobile devices, and reorganized pages for featuring talks from our Digital Dialogues series. The overall process was led by our designer Kirsten Keister but involved everyone at MITH.

_[/fusion_text][fusion_text]_This post is about one aspect of the redesign that I took a leading role in and that relates to MITH’s ongoing work to steward the digital humanities research that’s been done here. We wanted to improve the tools that visitors to our site can use to search and browse the history of MITH’s research. The result is our new “Research” page.

Creating the “Research” page involved an interesting confluence of challenges and approaches: part data curation, part records management, part appraisal, and part user experience design. My role was to translate the strategy for digital stewardship that Trevor outlined into the design process Kirsten was heading up while coordinating my research through MITH’s records with the work that Porter was doing to locate and reorganize legacy data from different websites and projects that had become obsolete or been decommissioned but were still being stored on MITH’s old servers. Throughout the process, I drew on some of my archival training to consider issues of appraisal and documentation. Also, as MITH’s project manager, I focused on communication and transparency to keep everyone collaborating efficiently.

A crucial insight—which we only recognized once we were well into the project—is that what we were doing with the “Research” page was less a redesign of existing content than it was a fundamental shift in how we conceive of this part of MITH’s web presence: to encompass a data curation mission. We were creating something new with this iteration of the “Research” page because MITH had never intended to use the website as a complete catalogue of all of the center’s many projects. As you can see browsing through the old versions of the site, what has become the “Research” page started out as something more like news: “What is MITH working on these days?” The purpose of creating pages for different projects and linking out to their other manifestations on the web was and is, first about publicity. We want people who hear a talk or read a blog post to be able to search for more information and find some kind of information about a project on our site. Successive redesigns grouped this information together and started using “research” or “projects” as part of the information architecture of the site. We can be pretty confident that no one set out to create a public catalogue or registry of MITH projects and websites. So, capturing a fuller picture of MITH’s output over the years is a mission that the website has grown into along with MITH’s own longstanding commitment to digital stewardship and to representing the history of digital humanities as a field. As part of this growing process, we’ve added a lot more metadata fields to the content management system that runs this site, we’ve collated and cross-referenced data that wasn’t previously part of the site, and we’ve worked to organize the data and make it available through a new, more usable interface.

First, there was a need for the consolidation and cross-referencing of data related to the history of MITH’s DH scholarship. Although we did have individual project pages online for the vast number of current and former MITH projects, we also knew that projects may have become less publicly visible over time for such reasons as sites becoming vulnerable to hacking and needing to be taken offline; side effects of past site migrations and upgrades; staff turnover leading to knowledge gaps or miscommunication about project updates; and no doubt, inevitably, some oversight/human error.

To start the process of gathering and updating data about MITH’s research, I started making a list of locations where MITH history was located:

Record retention is a tricky business in general, as is the appraisal of an organizational record. I liked to keep in mind Dennis Meissner’s warning that “too great an abstraction is an evil,” suggesting that an imaginative archivist could find some reason for the retention of every document, thus reducing appraisal to the level of an intellectual game. We cannot retain everything. Despite always having data curation and archiving experts on staff or working with us, there has never been a dedicated MITH Archivist. As with most organizations, the decision to keep or discard institutional records is often a choice made in a particular moment, mostly factoring in current assessments of need. So while we have a fairly complete portrait of our activities taking in all of the above five sources, that portrait had to be painstakingly assembled over a series of months.

I downloaded all available project and event metadata from the current MITH Wordpress site and set it up in a dedicated shared spreadsheet. Then the MITH staff met and talked through our ideas about the design of the revamped interface, determining what an ideal set of core project metadata elements would be, and what information would display where on the new site. We looked at what metadata was already present on the site, and Kirsten created a separate tab on the spreadsheet to track existing and new metadata elements. 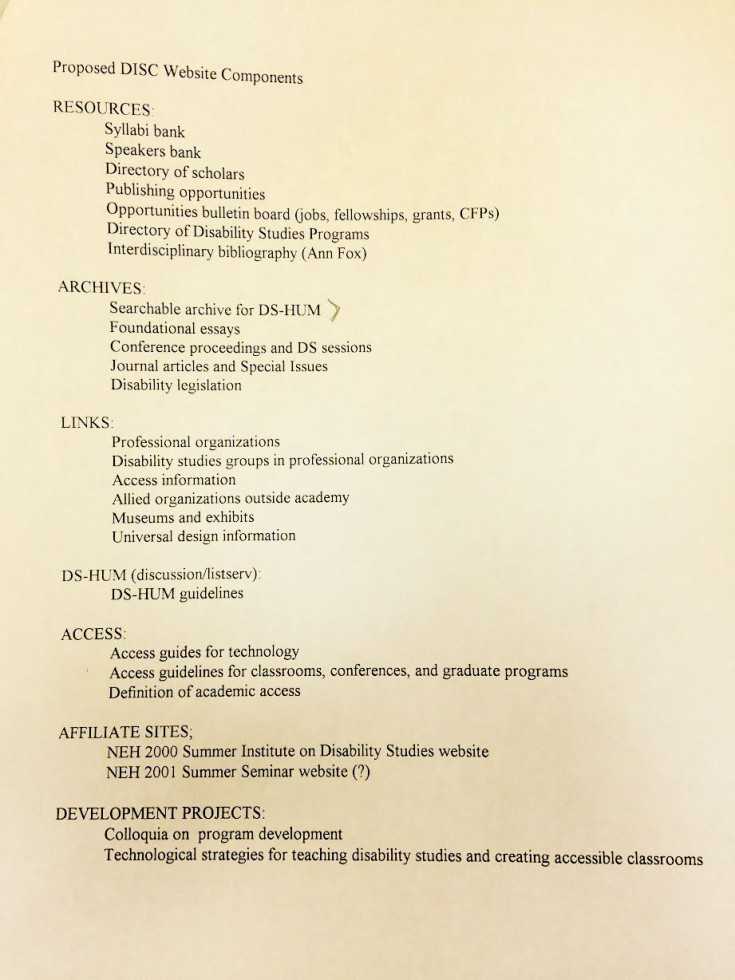 The easiest additions were projects which had been on former versions of the MITH site, now archived in the Wayback Machine. Since the descriptions and information in these had already been curated and vetted by former MITH staff, it was typically in fine shape for porting over as-is, filling in holes with other research. MITH’s electronic records provided much of the information about post-2009 projects that needed additional metadata.

Among MITH’s records were a number of different “tracking documents,” for example, documentation of the contents of a server as of a particular month and year. These could be helpful, but they were often created to serve a very specific purpose so they could also serve to obfuscate research conclusions, particularly in instances where there was evidence of a development site for a project which never came to fruition, or was only there to test out alternative versions of a current site. File paths from these documents were helpful in working with Porter to track down projects on legacy servers, but then I often had to track down all the basic metadata on a project in the MITH paper records.

The MITH paper records were a particular challenge because a) they were interesting and could lead to distracting perusal of old correspondence and documentation, and b) because they contained entire folders on projects which got very far in the development process but never came to fruition.. Often folders for projects that did come to fruition contained all the same types of records and data, so unless I checked in with the project director it was difficult to determine when to stop going down the rabbit hole.

The process of cycling through all of the above sources tended to be iterative, requiring back- and-forth rechecking and cross-referencing of conflicting data. But in the end I filled in all the new metadata elements for current projects, and added the full set of metadata elements for a total of 24 projects that will be getting “new” representation in our redesigned research-page-as-catalog.

When it came to enabling visitors to benefit from all of this data curation, Raff pitched in to develop a small Javascript application for the “Research” page to enable faceted browsing. For example, although projects often refer to the funder/sponsor in the description text, we’d never tracked that data in a separate field. And, although we’d used tags to assign keywords to specific projects, the main reason for using the tags was to connect a project page to related blog posts. Over time the list of tags had become a bit spotty and random. So, if a user wanted to explore the history of awarded MITH grant projects and then filter down on specific research topics, this information would need to be populated throughout all current MITH projects as well as projects we added through the consolidation process. To facilitate this, we developed a new, hierarchical taxonomy of Topic tags in a third spreadsheet tab. You can see the result of this re-tagging and re-organization through the options for faceted browsing on the left-hand side of the new “Research” page.

This process was rewarding in that I acquired a unique vantage point on MITH’s history, including the quantification and distinction of types of research we’ve really specialized in over the years. There were also many fascinating insights, such as learning about MITH’s role in the development of early online educational technology (see the Spain/Online project), and MITH’s role in helping develop Disability Studies as a recognized academic discipline (DISC: A Disability Studies Academic Community). Lastly, I was delighted to learn more about MITH’s history organizing spoken word poetry events involving the community (read about the Gwendolyn Brooks Poetry Slam in 2004, which featured the involvement of local high school students, and a community Q&A with Irvin Kershner, director of the Empire Strikes Back, after a public screening of the film.

With the new interface going live in conjunction with the latest redesign of the MITH website, I hope that our community finds as much inspiration digging into MITH’s history as I have.