An Invitation to Beta-Test the Infinite Ulysses Digital Edition

by Amanda Visconti on January 14, 2015 in Fellows, Research, Winnemore Fellows

In my previous post on this blog, I introduced my dissertational _Infinite _Ulysses project: a participatory digital edition that I've designed and coded for my uniquely shaped literature dissertation. I've now finished most of the work of building of the site. I've also finalized decisions around the online community experience such as writing statements on accessibility, inclusivity, and users' rights; explaining the research project that wraps the site; and clearly indicating how IP and copyright function for users of the site. I've now opened the digital edition to the very first beta-testers, and I'm inviting interested readers to sign up at InfiniteUlysses.com to join these first site users in a new conversation around Ulysses. 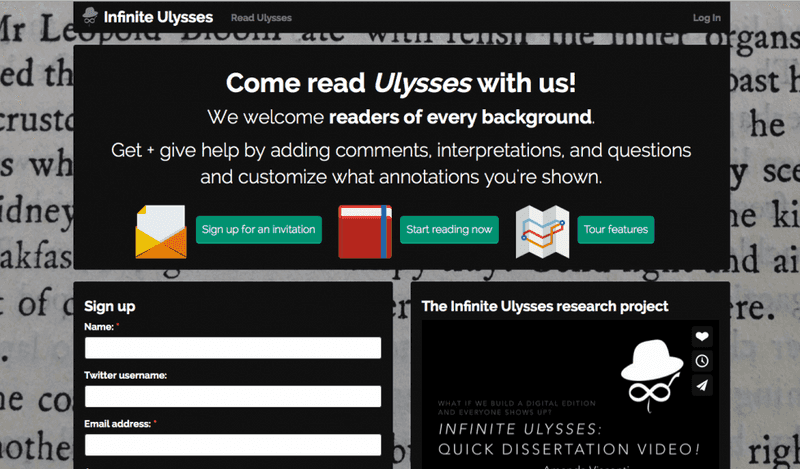 The site will eventually be open to everyone (with a planned public 1.0 release on the upcoming Ulysses holiday Bloomsday—June 16, 2015). Though during the final phase of my dissertational project this spring, I'm keeping a list of interested readers and slowly adding new users to the site from that list over the coming weeks.

This slow beginning will let me fix any really grievous bugs before there are too many users on the site. Adding testers slowly also lets me work more directly with each user as they join the site, gathering their feedback and discussing their user experience. I'm particularly interested in testing the site with people reading in groups, such as book clubs or teachers and their students; some additional site features coming at the end of this month will support group reading and help me test how the edition can support offline groups, and I'll be adding groups of users to the site at that time. As new users explore the site, I've been reading on it myself, seeding the text with more annotations aimed at first-time readers (these build off 215 annotations on the first two episodes I authored for a previous incarnation of this edition).

This project involves both new code (CSS, HTML, PHP, and JS/jQuery as components of a dissertation) and a demonstration of building a new tool through combining and customizing, rather than reinventing, existing digital humanities wheels. As such, my project is indebted to the various open-source code libraries and scholarly projects I've built off. A full credits page will appear on the digital edition and on the provenance section of the code repository, but for now I'd like to particularly thank

If you'd like to know more about Infinite Ulysses or the dissertational research surrounding it, you can watch a quick three-minute video and read more here, or get the latest by following my regular research blogging at LiteratureGeek.com.

Amanda Visconti is MITH's Winnemore Digital Dissertation Fellow for 2014-2015 and a Ph.D. candidate in the University of Maryland English Department.